The Inside Out Photography Project: Expressions of Humanity 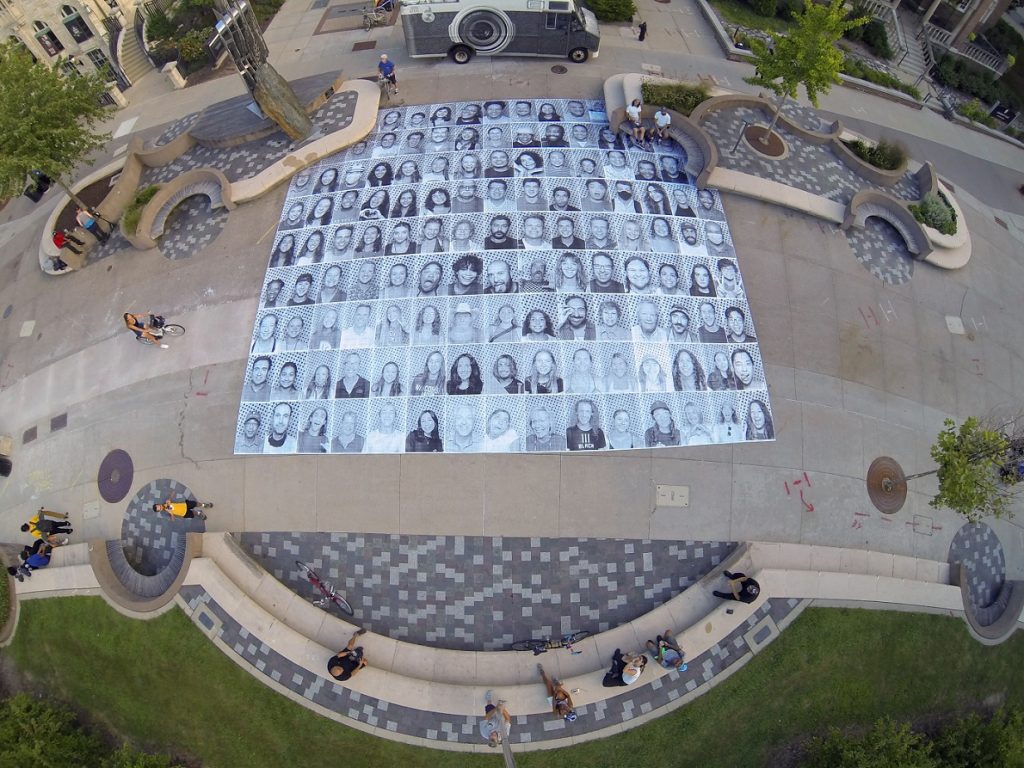 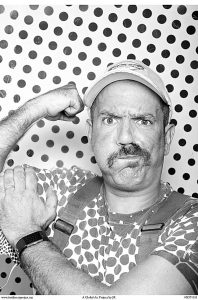 Top: The Inside Out project on the UW-Madison Library Mall (Kite Aerial Photography by Craig Wilson); Above: Jaime Scatena’s own Inside Out photograph

In 2011, the French photographer JR won the TED prize and expressed his desire to change the world through photography, to turn the world “inside out.” He used the $100,000 in prize money to start the Inside Out Project.

“JR created Inside Out so he could transfer to people his platform of large black and white photography,” said Jaime Scatena, a Brazilian and civil engineer who came to New York City 10 years ago to become a market photographer, volunteered with Inside Out in 2013 and became a project manager. “And so Inside Out is work where people from anywhere in the world send their portraits to our studio in New York City. We then process the portraits into 3 feet by 4 feet sized posters and we ship these posters back to the people so they can install them in their community and make a statement using photography, using the faces from their community. The project was imagined to have a lifetime of one year and it’s been 10 years. And after 10 years that we celebrated last March, we’ve printed more than 400,000 portraits and enabled art exhibitions in more than 138 countries and celebrations around the world.”

In that sense, Inside Out is a grassroots expression of humanity and the driving philosophy is that when confronted with people’s humanity through large photographs that people will have to accept the diversity of the words.

“The portraits are of everyday people,” Scatena said. “We have young people. We have old people. We have actually related young generations with older generations. We had prisoners inside of rehabilitation facilities. We had women fighting for women’s rights. We had fight against racism. We had a celebration of the essential workers during the pandemic. We have people from all types of backgrounds be a part of this. We have portraits of 400,000 people from around the world. I don’t think there is any project that has that reach.”

While Inside Out creates portraits for groups from around the world in its New York studio, it also hits the road for special projects from across the United States.

“When we are on the road with our portable truck, we do the actions different from the standard group action where people do their own thing and we just bring it,” Scatena said. “When we have the portable truck, we are basically bringing the printer to the community. And then they sit inside the truck. We take the portrait and print it right away. Then we install them on a wall or on the ground nearby. And what I notice is that very rarely are these posters defaced or vandalized because from my understanding is that people can relate with other human faces in a way that is unique for our project. That’s what JR’s main wish was, that art could change the world, not by changing the world itself, but by changing people. Once you start changing people, people can change the world. And thankfully, we are, in a good way, making people relate to each other, making people talk to each other, making people work together to put up an installation in their community. I think JR really got his wish granted.”

This past summer, the Inside Out Project’s portable truck made a stop in Madison.

“We were first trying to do the installation at the historical museum downtown at the capitol,” Scatena said. “It didn’t really work. And so we ended up doing our Plan B, which ended up being a circular installation on UW-Madison Library Mall. The guy who took the photo has the longest selfie stick I’ve ever seen. It’s like a 33 foot pole that he attaches a camera to it and it becomes a huge aerial photography without leaving the ground.”

The exciting thing about an Inside Out Project is it leaves a lasting impact on a community.

“I think that Inside Out has two really magical aspects,” Scatena reflected. “One is building a sense of community because no Inside Out action has involved one person. It is always gathering people around a theme or having a conversation coming up with the theme itself, taking the pictures and putting up the images and installing it in their community. We have this sense of working together and creating something beautiful together. The other thing that I think is really special is bringing photography back to print because we are so accustomed these days to think of photography only on our tiny small screen. And when you see your face printed 3 feet by 4 feet, it really changes the relationship that you have with photography and yourself. I’m very used to this. I kind of take it for granted. At every action, I have to staff the printer. I take my pictures all the time. And I forget how magical it is the first time you are part of the action and you can see your face really big. It is really magical.”

And in its expression of humanity, an Inside Out mobile project can also become a fundamental political statement as well. Its current project makes a huge statement.

“We are covering 16 cities across six states with two of our portable trucks to raise awareness about the 11 million undocumented people who live in the U.S. who need a passport to citizenship,” Scatena said. “At every place that we stop, we engage people to participate. Behind each of those faces, behind every face, there is a history of immigration at some point. They are immigrants themselves if their loved ones are immigrants or they work with an immigrant who is legal or non-legal. Sometimes we really don’t know about that. But our point is behind every story of immigration, there should be a pathway to citizenship. That is what we are fighting for because we all are related with immigration somehow. We are all related with immigration somehow. We are part of the problem and we must be a part of the solution. We must be part of the conversation to create that pathway of citizenship for all of the people who are already a part of America, but they aren’t being fully part of America because a lot of rights are not granted just because they don’t have the regular paper.”

Scatena reminded us that we have all been there before.

“Just like your ancestors had a way to become citizens, we think that these 11 million should have a pathway,” Scatena emphasized. “We don’t want people to just illegally gather papers. We want people to have a way to go for it and legally become a part of the American democracy and a part of the American Dream. Anyone can get involved in this conversation by talking to people, getting to understand better what this conversation on pathways to citizenship all about. And they can reach out to lawmakers and sharing their opinion. ‘I think you should do this.’ It’s a cultural action. We want people to get to know more about what this whole subject is about. And the second one is trying to make a positive change to help these 11 million people who are not fully a part of the democracy.”

The Inside Out Project is changing the face of humanity one photograph at a time.

To learn more about The Inside Out Project or to view photos of their installations from around the world, visit www.insideoutproject.net. 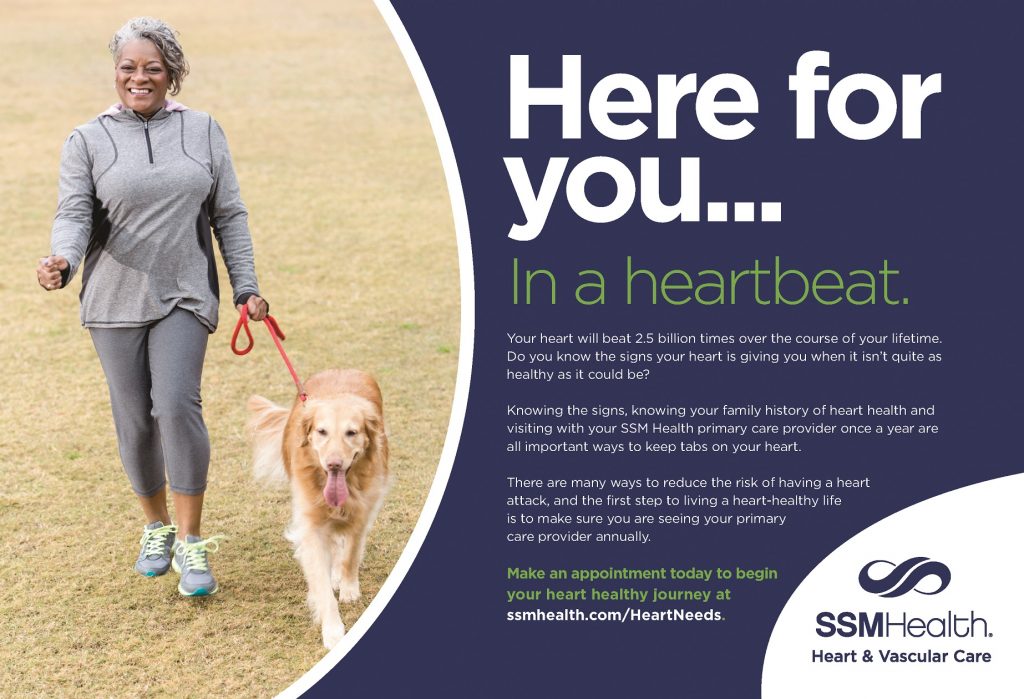