Graduation at Madison College: Growing Within & Without 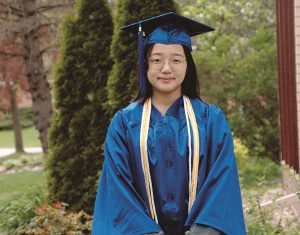 Chungyi Law came to the U.S. with her mom from her native Hong Kong when she was a little girl. They moved around the United States until Law’s freshman year in high school when they moved to Madison and Law’s mom landed a job with Union South and the Memorial Union.

“My mom is actually a housekeeper/janitor,” Law said. “She is like a server or a cook. She takes orders. She doesn’t speak the best English, so they call her whenever they need her, so it could be working in the hotels or doing sanitary work.”

College ad, she wouldn’t have known about the MMSD-Madison College STEM Academy. She applied because she had an interest in STEM and was accepted into the program.

“When I figured there weren’t a lot of people who looked like me in the STEM field, I wanted to pioneer and be my own role model in a way,” Law said. “But then as I progressed in the STEM fields at Madison College, I said, ‘I don’t think this is for me.’ My first year, I took college chemistry, calculus and botany. I took a range of science classes and math classes. And I just didn’t think that was for me.”

Law had a lot of different interests and so it was hard for her to narrow down the field.

“Since my last name is Law, people have always joked, ‘Oh my gosh, you should be a lawyer,’” Law said. “I took a class here that helped me decide that maybe that isn’t the path for me. At this point, I wasn’t sure what I wanted to be in the beginning. When I was going into the STEM Academy, I was like although I had interests everywhere — my interests were scattered — STEM Academy and Madison College helped me to narrow them down. ‘This isn’t what I would like to do.’ That was very helpful and I didn’t need to spend any money to find out.”

There was something gained and something lost by joining the STEM Academy. What Law gained was a two-year bachelor’s degree on top of her high school diploma this spring. What she lost was much of her connection to her home school, Madison West High.

“STEM Academy students were obligated to stay from 8 a.m. to 2:30 p.m. on the Madison College campus,” Law said. “Even though our classes were from 9-10 a.m. and then you had no classes until 3 p.m., kids would be free to go back to their home high schools after 2:30 p.m. to partake in sports, club meetings or whatever their home high school had going on that they were interested in. It was unfortunate for me because in my case, all of the clubs that I was still a part of like HOSA had their meetings during lunchtime. I had classes at that time or I was doing homework and I wasn’t allowed to leave campus at that time.”

Law made up for it by becoming engaged in Madison College clubs.

In addition to her academics, Law learned some other important lessons while at Madison College. The pandemic was bad enough for everyone. But the anti-Asian incidents that happened around the country made it especially difficult for Asian American students.

Another thing she learned was to believe in herself.

“For high school students going into college and being wherever they are or not going to college and are finding the right path for them, I would say they should be confident in themselves,” Law said. “That was a base thing that I was working on these past two years, having faith in myself. Especially during these times when mental health issues are on the rise and all of these things are happening to us, I think it is important for us to have faith that we can accomplish what we want to accomplish in our lives. High school students compare themselves to others, I don’t think that is healthy in a way. Many people are always going to compare themselves to others. I hope high school students become comfortable with themselves and comfortable with where they are going.”

Law will be moving right along with her educational career this fall at UW-Madison. She still hasn’t narrowed down the fields that she is interested in.

“I’ve had wonderful suggestions throughout my time here,” Law said about suggestions on what to study. “Maybe there is some STEM in my future. I do have an interest in environmental science. The environment and climate change are very important to me. I’m still trying to figure it out. But I know I have narrowed the list of things I want to consider down. I have multiple advisors. And everyone I come across is very, very helpful. Essentially since I took a lot of classes at Madison College, I will transition in having those credits. I won’t have to take basic courses when I go to UW-Madison like students coming out of high school usually have to do. Since I am still undecided and not really sure where I want my path to lead, I will have maybe three years at UW-Madison to figure it out.”

By staying true to who she is and believing in herself, it is only a matter of time before Chungyi Law will discover that field she is most passionate about. Until then, she will continue to explore the world.