The Musical Pretty Woman at Overture October 18-23: What a Happy Man 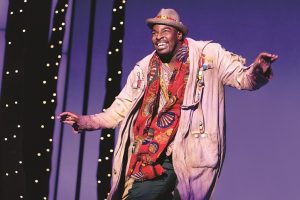 When he was growing up in Milwaukee, Kyle Taylor Parker’s mom must have had a notion about her son’s creativity and found an outlet.

“I wanted to do this since I was 6-7-years-old,” Parker said. “My mom put me into an afterschool program. I really took to it. I just really enjoyed it and stuck with it. By the time I was 12-years-old, I started entering really competitive programs like Interlochen Arts Camp in Michigan and a musical theater program at Howard University in Washington, D.C. That’s when it really clicked for me that I would be doing this professionally. I moved to New York City to attend a college at the American Musical Dramatics Academy where I studied musical theater performance. And I never looked back after that.”

Did Parker starve as he entered the New York Broadway scene? No. But he had to work his butt off to make everything work for him.

“I have worked a lot of odd jobs in between my time on stage,” Parker confided. “When I was in college, I sold merchandise on Broadway for In the Heights, one of the shows I worked. It was really cool because you get to see the show too. I worked in retail. I have taught a lot.”

After graduation, Parker got his first break on Broadway.

“My first Broadway show was Kinky Boots,” Parker said. “I started in the original Broadway Company, in the ensemble. Eventually, I became an understudy for the starring role, Lola, which was originated by Billy Porter. I then went off and did the national tour of that show. And then I came back and replaced him on Broadway when he left the show. It was the ride of a lifetime. It was a great start.”

As a music theater artist, Parker has two important skills: acting and singing. And the one did not preclude the other. Parker decided to produce an online album.

“Soul Sessions were my baby steps into becoming a recording artist,” Parker said. “I didn’t even know that is what I was going to do. I was currently working on Charlie and the Chocolate Factory on Broadway. I played a really fabulous character named Mrs. Green. But for the first time in my career, I wasn’t singing. I had three scenes in the show. And that was it. I loved them, but no singing. And so I needed an outlet. I thought, ‘Why don’t I just make these YouTube videos of me taking Broadway songs and turning them into soul songs. And I will call them the Soul Sessions.’ I was just kind of putting it out there. The musical closed and my manager said, ‘Hey why don’t you do a live show of the Soul Sessions?’ I was terrified. And he said, ‘You should do it the day after the show closes.’ I had never done anything like this. It was my live concert debut. I decided to do it. And I was surprised at how many people came. We sold out Green Room 42. And it wasn’t all just my friends. I just showed the reach that you can have with an audience from technology. By making a video on YouTube, making your product of creativity and putting it out there and paying for it to be advertised and spread around the internet, you can really build your audience. It really helped the game as far as being an independent artist goes. It used to be that you needed a big label to really get yourself out there. But with creativity, some really hard thinking and some hard work, technology can help you spread your message.”

And one good thing led to another.

“The second album, Broadway Soul, Vol. 2, was actually created during the pandemic when there was no Broadway to be had,” Parker said. “There were no on-stage performances. That was so much fun. It was so collaborative. I got to sing with a lot of great artists like Shoshana Bean, Blane Alden Krauss from Hamilton, Natalie Joy Johnson, and Jackie Cox and we created the album remotely. I recorded in my apartment. They recorded in their home studios. And the project that I am very, very proud of. It was just a great way to spend the pandemic. And I was on film with Pretty Woman: The Musical as well as in iTunes and everything else. I worked with a producer, Rich Mercurio who did the mixing of the album. Oscar Zambrano did the mastering of the album. So I had help. I’m not the most technically savvy, but we made it all happen.”

“I’ve always wanted to do it all,” Parker said. “I’ve called myself a really creative person. And it is fun, the journey of creativity. It’s a lot of fun. I would also say that I am a multi-hyphenated artist by necessity as well. If you sit around waiting for the phone to ring, you might be waiting for a very long time. But by creating your own art, you put yourself out there and open so many other doors for yourself. It has really circled back to musical theater. I have been called in to audition for musicals based on the work that I have created for myself.”

And as Parker’s career took off, he developed connections, which open doors of opportunity. The director of Kinky Boots was Jerry Mitchell who was working on Pretty Woman. Parker got an audition and landed the role of Happy Man, a key role that ties all of the elements of Pretty Woman together and pops up all over the place, even in the audience.

“I play the Happy Man who is really the fairy godfather of this story,” Parker said. “I play a lot of various characters and help Vivian Ward fall in love and achieve her dream. One of them is the hotel manager. I thought it would be a good fit and it is. I’m having a blast. Mr. Thompson, the hotel manager, gives her that fabulous makeover before they go on their first big date. In this musical, he teaches her how to tango. It’s really my favorite number in the show.”

When people come to experience Pretty Woman, they will recognize the play if they have seen the movie.

“It is pretty true to the film,” Parker observed. “The major things that people love about Pretty Woman, they get from the musical. You see the red dress. We go to the opera, which is another gorgeous scene. Those lines Big Mistakes, Big Huge, you hear them. Sometimes the audience wants to say them with us. We lean into the fairy tale aspect of it with my character. But I am playing characters that are all familiar to the audience, so it isn’t so out-of-pocket. The iconic story is there, the love story of Vivian and Edward Lewis. That is all so there.”

Yet even for those who have seen the movie Pretty Woman, it will be a new experience due to the talent and execution of the cast.

“We just got a new Vivian Ward, Jessie Davidson,” Parker said. “She debuted last evening. She’s just terrific. Everything that you would want to see in that iconic part, you see in Jessie’s performance. Julia Roberts was really put on the scene doing this role. If you need someone who is honest, someone who is lovable, someone who can really just steal your heart, Jessie Davidson does that. We’re also performing with Adam Pascal, who is a Broadway legend from Rent. His voice is the sound of my childhood really because I wore out my cast recording of Rent. He sounds exactly the same. And he has a number in the show that just takes your breath away. The ensemble is a group of really, really talented individuals who can do anything. They have played many, many different characters as well. You are watching a bunch of people who are just about to take off when you look at our ensemble.”

Parker hopes that the audience will have as much fun as he is having on stage. He says that the play is nostalgic and high energy and thoroughly entertaining. His parting words are, “Come see Pretty Woman” and find out for yourself.